WHY SASHA BECAME A MIND COACH AND HYPNOTHERAPIST

A Hypnotherapist Finds Her Calling:

“After a childhood of trauma, local woman finds solace in hypnotherapy” 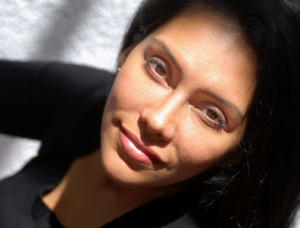 “Sometimes it’s like being freed from a curse,” says hypnotherapist Sasha Carrion about the benefits of the treatment. Hypnosis can be an effective treatment for mild depression and anxiety disorders.

Sasha Carrion will tell you from firsthand experience: It takes a lot of strength to overcome a lifetime of trauma. But nearly 30 years after her mother disappeared — murdered, she believes, by her own father — the 32-year-old former Torrance resident has figured out a way to put the past behind her.

She did it through hypnosis. “My whole life was absolutely centered on getting justice for my mother’s murder,” said Carrion, who was so moved by her emotional transformation that she became a hypnotherapist. “It had consumed me.”

Hypnosis, a process by which a person enters a state of deep relaxation and heightened suggestibility, helped Carrion heal by allowing her to let go of her past.

It wasn’t an easy past to relinquish. Carrion’s life has been a series of struggles — tragic events that began 27 years ago when she awoke one day to find her mother, Rosa Maria Marquez, missing from their Bell Gardens home.

She was 5, and her parents were separated and in the process of getting a divorce. “I remember calling out to my mom and she didn’t say anything,” said Carrion, now a stunning woman with deep brown eyes and coffee-color hair. “The next thing I remember is the cops were there.”

Carrion’s father, Raphael Marquez, whom Carrion described as abusive and volatile, was questioned about the disappearance but never arrested. “The police were asking me questions,” said Carrion, who chose to take her mother’s maiden name. “My dad showed up and he quickly pushed me to the side and said, ‘Don’t tell them that I ever hit your mom or you.'”

Her father fled to Mexico shortly afterward, leaving Carrion and her 3-year-old sister in the care of their widowed grandmother. Because her mother’s body was never found, police never categorized her disappearance as a murder. Consequently, Carrion wrestled with the possibility that perhaps her mother had left them.

“I knew it was either A, my father had killed my mother, or B, she had abandoned us,” Carrion said. “You can’t win with that. Either way you lose.” 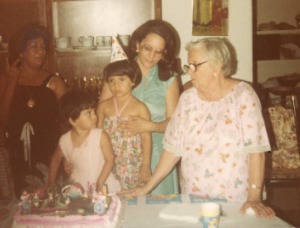 Sasha Carrion wearing the party hat celebrating her last birthday with her mother, sister and the grandmother that raised the two girls.

When Carrion was 19 and ready to face her past, her paternal uncle agreed to take her to her father. They flew to Mexico, where had remarried and had two more children. Shortly after their reunion, Carrion asked her father: “Did you kill my mother?”

He said no. “He told me that she had left him for another man,” Carrion said. “I was so desperate for a family that I believed him.”

For almost a decade, she maintained a relationship with her father and his new family. She sent gifts. She visited often. Then one day, her uncle came to her with a confession.

“He told me, ‘I’m afraid if I die I’m going to have to face your mother on the other side,'” she said. “Then he tells me how my father killed my mother.”

Carrion suspected her uncle’s words were true. “I called my father to confront him about this. He didn’t admit it; he just told me to (expletive) off.”

Carrion tried to get legal action taken against her father — she even got her story featured on the Web site of “America’s Most Wanted.” But there was no evidence. No body. Nothing she could do. In 2007, her father died from a rare form of lymphoma and cirrhosis of the liver.

“The moment he died, it was as if I was free,” she said. “I had that weight taken off my shoulders. It was to the point where it had completely taken over my life.”

By that time, years of distress had taken its toll. Not yet 30, Carrion was suffering from a host of ailments, migraines, hair loss, stomach pains and backaches.

Doctors couldn’t help her, she said. Antidepressants didn’t work either.

It wasn’t until, on a whim, she decided to try hypnotherapy that she began to feel better. “I was finally able to let go,” she said. “I felt better almost immediately.”

Carrion said becoming a hypnotherapist herself (at the time she had been working in the fashion industry) was a natural step. Within months, she was certified by the International Hypnosis Federation and the Omni Hypnosis Training Center, the first accredited school of hypnosis. She had found her calling.

“When I did my first class of hypnosis, it was huge,” said Carrion, who practices out of her home in Marina del Rey and an office in Redondo Beach. “They asked for volunteers, and every chance I could get I would put my hand up.”

For most people, hypnosis conjures images of swinging pendulums and sleeplike trances. In reality, it is more aptly described as a state of focused attention and heightened suggestibility, during which the patient is completely aware of what he is doing and saying.

“There is a fear that with hypnosis you can make the client do whatever you want them to do, but it doesn’t work that way,” said Torrance psychiatrist Isabel Puri. “The person who is in control is the patient. At any point, if you want to stop the hypnotic state you can.”

Puri, who has a certificate in hypnotherapy, said hypnosis can be an effective treatment, particularly for mild depression and anxiety disorders. “Typically, the milder disorders are more likely to respond to hypnotherapy,” she said. “That is because all hypnosis is actually self-hypnosis. Once you learn the techniques, you need to practice by yourself.”

Hypnotherapy is often used to help people stop smoking, lose weight and overcome phobias. It also has proven helpful, as in Carrion’s case, in overcoming trauma.

To break the trauma cycle, a hypnotherapist must replace negative thoughts with positive, reassuring thoughts and feelings. “Sometimes it’s like being freed from a curse,” Carrion said.

That’s how it felt for “Joan.”

An Orange County attorney who preferred her real name not be used, Joan, 27, had been suffering from anxiety and panic attacks for several years before going to see Carrion. “It was to the point where I literally could not eat in a restaurant, not even a Subway or McDonald’s,” she said. “Basic things like going grocery shopping and running errands was a struggle.”

Joan had heard about Carrion through a friend who had gone to see her. She said she was skeptical at first, but decided to give it a try. It worked. After only two sessions, Joan said, she started feeling better. Carrion also taught her self-hypnosis, which she used at home. “Right away, I noticed that I wasn’t as agitated,” Joan said. “Instead of going to the bad place where everything is a crisis, it’s more like, ‘Things are going to be OK. Things are fine. I’m in an appropriate amount of control.”