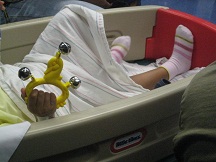 Chronic pain affects millions of Americans, starting at birth and enduring a lifetime. Western, traditional medicine has been battling that pain and its medical causes for decades with the use of the best drugs available.  However, for those patients receiving treatment for their chronic ailment and its coinciding pain, Western, traditional medicine has begun to embrace a new source of hope and patient empowerment in the field of pain management.

During his residency at Massachusetts General Hospital, Dr. Raffi Tachdjian worked with babies, children and youth in pain, and with a humble spirit learned about pain management through his patients. He said that in some ways, “the patient became the healer.”  One of Dr. Tachdjian’s earliest patients responded to his initial visit with skepticism about his ability to help in any medical way.  In response, Dr. Tachdjian set aside his clipboard, and said, “Let’s talk about what you want to do. What’s fun?” The youth’s response was “playing the guitar.”  Soon afterwards, Dr. Tachdjian acquired a donated guitar and a keyboard from a local music store and brought it to the young, ailing music student. The youth, who Dr. Tachdjian described as “waiting for his time to come,” began to react positively.  Explains Tachdjian, “This guy cracked a smile…you know, just a bit. He came to life, basically.”

This led Tachdjian’s invitation of all the patients on his floor to the play room at Massachusetts General Hospital to hear the youth, a guitarist virtuoso of sorts, play his strings. The result was astounding.  “I’d say about two-thirds of the kids rolled out of their rooms with their poles, their I.V. poles, and I mean, drove the nurses insane. They were saying, ‘What the heck do you think you are doing?’” remembers Tachdjian.  However, “we proceeded to jam…and the next thing you know, the kids were picking up forks and spoons.  Whereas in any other circumstance, there would be bickering or a fight with words, there was such a respect for the music.  Of course there’s always one kid who might not be on board, who might have spastic cerebral palsy, but the music performed by the others compensated to the off-tempo and kept flowing.

It was a patient of Dr. Tachdjian’s who had attended the Berklee College of Music who initially introduced him to the healing potential of music.  Her roommate, a studying music therapist described herself and other music therapists as “…quarterbacks. We see the patients depressed. We up the tempo. We might calm down a nervous, anxious kid, and we play it by ear, changing on the fly and we always engage the patient.”  It was then that Tachdjian really became interested in alternative pain therapies, that as his new friend explained, involved “engaging the patient.”  That was something he could do through music therapy.

He first became interested in Music Therapy, then art therapy, and finally hypnotherapy. He says that patients’ positive reactions to these sorts of alterative non-medical pain relief methods were initially understood under the Gate Theory.  The Gate Theory proposed that neural stimulation beyond a certain threshold level could overwhelm the ability of the nerve center to sense pain.  Explains Dr. Tachdjian, “under this theory it was believed that a patient could use up a lot of the brain power in the pre-frontal, acoustic cortex or occipital cortex to (redirect) the metabolism” from the pain-sensing area – perhaps in a patient’s right leg.  “That was the old theory.”

Dr. Tachdjian describes the new theory about the efficacy of these non-medical pain relief procedures as “a little more complex.” He is fascinated with the interaction between natural, patient-involved healing methods with the human body’s vertical “neuro-signals or neuro-circuitry.”  In his work at the University of California, Los Angeles, he dealt mainly with younger patients, ranging from infants to young adults. Some of them dealt with debilitating diseases, such as epidermolysis bullosa, which presents symptoms such as extremely fragile skin and extreme pain.  In working with these patients, he began to capitalize on the wisdom of his young “patient/healer” in Massachusetts General Hospital with a wish for a guitar. 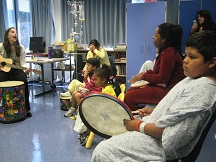 Tachdjian understands that everyone wants control over their lives, not dependency. With music, art and hypnotherapy, there is “empowerment and liberation from pain, anxiety, or whatever the noxious cause may be.”  Explains Tachdjian, “With these alternative therapies, the patient has control. The patient is mentally still there, and conscious” (not under general anesthesia) as Tachdjian conducts his procedures.  “The patients see me perform the procedures, but the difference is that they are part of it. They have control. They are in a different place emotionally, but mentally they’re still there. Physically they’re still there. So I might use a little anesthetic, but I can take my time to find that vein, and the alternative therapies do their work to allow the patients to be able to handle the procedures.”

Continues Tachdjian, “What we’ll do is ask you to sing, or talk to you about where you are visualizing going on vacation, and as we stick a tube into you, we’ll compare that tube to a straw containing your favorite soda. The patients know that they are experiencing the surgical procedure, and you talk about that too, but they are awake, and they’re using music and hypnotherapy” (to make it a much more pleasant and empowering experience).

As a result of Tachdjian’s successful experiences with alternative patient-engaged treatments for pain management, he founded an institution dedicated to music therapy.  The sixteen year old boy with the wish not for another doctor to take his vitals, but for a human being to provide him with a guitar unfortunately died eventually, but his father still feels immense appreciation for Tachdjian’s ability to “restore (the boy’s) dignity.”

Inspired by his experiences, Dr. Tachdjian founded The Children’s Music Fund, a 501(c)(3) non-profit foundation dedicated to giving children the music therapy they need in 2002. Its mission is “to provide musical instruments and music therapy to children, adolescents, and young adults with chronic and life altering illnesses, and to support research on the effects of music therapy.” More information can be found by visiting www.TheCMF.org.

Sasha Carrion Life Coaching and Hypnotherapy
5.0
Based on 112 Reviews

Sami A.
2020-07-20 16:01:23
It's not often you come across someone who not only has the passion but the ability to change your life. I've struggled with pretty severe depression for...

Maria G.
2020-05-15 11:32:57
Sasha's voice has been in my head for years! Her hypnosis sessions have been extremely effective and really pleasant to listen to. With all the stresses in...