Many times, my work consists of helping people free themselves from negative patterns that keep wanting to subconsciously resurface, invading the present, making a person think and behave from that unwanted place where a person feels totally out of control.  If you are reading this, it’s because you know that feeling and so do I.

When clients come in and often explain what they are going through, I understand not only from the perspective of the person who is helping them retrain their minds but also that of a human being who has encountered similar situations.  I often say that my greatest weaknesses have become my strengths because it is all of those negative events that have given me the ability to empathize and really understand my clients.  I’ve been there and seen my way out.  I know that the same way I’ve done it, the person that is sitting in front of me can do it too.

And while I’ve made great progress in my own life to where you’d never know what I’ve been through by just looking at me, I always strive to improve.  I push myself because I want to lead by example.

That’s why for my most recent birthday, I decided that I was going to get my open water scuba certification.  This was a big deal for me because while I am always jumping into water, I tend to do so with trepidation.  As is the case with most issues, this started in my childhood.  When I was close to 5, my father threw me kicking and screaming into a pool assuming that I would instinctively swim.  I was terrified.  I felt like I was going to die.  As I screamed, my nose and mouth filled up with water.  My father took a while to dive in and get me and by the time he pulled me out, I was a mess.  I remember throwing up next to the ledge with some of the vomit getting into the pool so they had to pull all of the other kids out.  My father, who was already prone to being abusive, screamed at me and hit me.  Since then, a little bit of water in my nose or mouth has always brought on feelings of panic that even in a 5 ft. pool would pop up even though on a very basic level, I knew they were irrational.  Then again, that is what a panic attack is… totally irrational.

As part of the scuba diving certification, I was asked to remove my mask, put it back on and then remove the water that had gotten in as well as remove my regulator, which is my air source, from my mouth, throw it away from me, retrieve it, open my mouth letting water in, remove the water with the regulator and breathe normally.  As you can imagine, I was hesitant.  The thought that maybe I couldn’t do it popped into my head but I wasn’t going to give up.  I started doing self-hypnosis shifting my self-talk to positive, telling myself that I could do it and I did.  For some other person, that probably wasn’t a big deal but for me this was HUGE.  As funny as this sounds, the little kid in me felt so good.  It was akin to raising my arms and saying, “Victory!”  Since then, I’ve done about 7 dives and my goal is to dive the 7 seas! 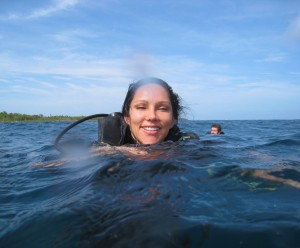 So you see, when you come in to see me, you’re not coming in to see somebody who does this as just a job, but as a person who practices it in her own life.  Live is too precious, the world is full of so much beauty and our time on this earth is too short to live our lives based on the past.