It’s a frustrating thing when you’ve tried to do something many times before only to find that you keep coming across the same constraints or blockages over and over again. It’s the repetition of this same scenario that teaches you the words “I can’t.” Your mind becomes convinced that certain negative beliefs are not only true but a fact of life. The next time a similar situation arises, your mind quickly jumps to those two same words stunting your potential to break the pattern. I have an interesting personal story to share with you about this.

I love traveling to places during festivals because in my ever growing pursuit to understand people, I find that I get a better understanding of what is important to people by witnessing their rituals. I recently visited Tibet, timing my journey in order to experience their yogurt festival which for many Buddhist believers takes a religious tone. The Drepung Monastery in Lhasa created a huge Thankga, which in this case is a religious painting of the Buddha that is painted onto the side of a large hill. Devotees make their pilgrimages to see the painting, pray and give offerings. 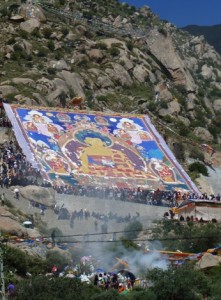 Chinese officials had closed off the streets for blocks away so not only did we have to practically climb the hill to the Drepung monastery but we also had to do more walking than is normal to reach our destination. Because Lhasa is at a high elevation, there isn’t as much oxygen to breathe making the climb more difficult than normal and to boot; you really feel the sun’s rays. Most people have either a hat on or an umbrella. After taking hours to get to where we could witness the thankga, we started our descent. On the way down, we passed a scattering of tiny “hole in the wall” establishments that sold food. I knew I really needed to refuel. Even so, I was leery of what these little places offered. One thing for sure was that I wasn’t about to eat Yak meat since I don’t eat red meat. My guide assured me that he would order me a vegetarian bowl so I sat down next to everybody else and began to wait. 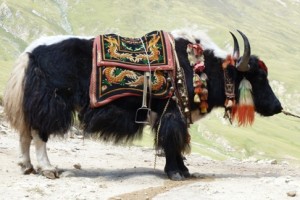 When my food arrived it was accompanied by a pair of chopsticks. I quickly explained, “I don’t know how to use chopsticks.” I had tried numerous times to use chopsticks in the past – including during a trip to Hong Kong many years earlier but I couldn’t quite get the hang of it, so I got used to politely asking for a fork. My request for a fork was met with a “There are no forks here and there are no western style restaurants close by.” This made sense since the monastery is on the fringes of the city. I sat there looking at my bowl. For a brief moment I thought, “Well, I guess I’ll have to wait to eat.” But then my very logical side kicked in reminding me that I had no more energy and that I still needed to get down from the hill. 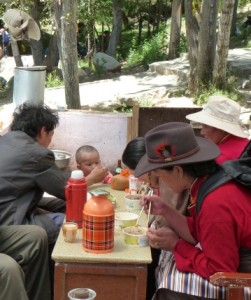 At that moment, my mind went into survival mode – demonstrating to me that survival mode has a higher mental priority than negative belief mode. I automatically stopped telling myself that I did not have the ability to eat with chopsticks and replaced that idea with a new one: “If I don’t use these chopsticks, I am not going to eat. I need to eat. I have to eat.” There were no ifs ands or buts about it. “I can do this,” I told myself. It was almost as though a switch flipped to on in my head and even though I fumbled about clumsy with those chopsticks, I found myself beginning to have success in picking up veggies. One chopstick serving at a time, I ate all the vegetables and then started attacking the noodles. I couldn’t believe it. I could do it! I could use chopsticks. I had gone from never having been able to eat food using chopsticks to successfully making it happen. 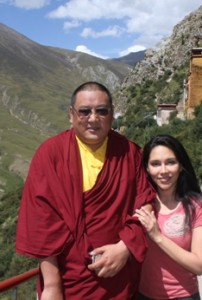 Even though it might seem like a small thing, that day’s accomplishment reminded me of how important our mindsets are and how the past can keep us from moving forward if we let it. In my case, it took a moment of perceived urgency to stop being limited by the past.

Take what you can from this story and the next time the words “I can’t” pop into your mind, my suggestion is to rethink it. Just because something has happened a certain way in the past doesn’t mean that it has to happen the same way in the future. When the time is right and your mind is open to a new possibility, you will be able to break free from whatever pattern you have been experiencing and move into a place of “I can.” Take it from me… It feels much better there.